BRISTOL SPRINGS - On the slopes high above Canandaigua Lake, John Brahm III's grapes must contend with ruinous fungi, 15-below cold and the odd blast of wind that can send a mobile home flying.

The environment is too harsh, he feels, for growing delicate grapevines like Gewurztraminer, one of the European Vinifera varieties that produce the worlds most sophisticated wines.

So Brahm has long relied on French-American hybrids that out class the native labrusca grapes but are hardy enough to thrive in upstate New York.

Now, after 31 years of experimentation that began in an Illinois fruit breeder's vineyard and took root on the steep hillside next to Brahm's lakeside home; a new Vinifera-like grape designed to outwit the cool climate and the ravages of insects and mold has gotten his heart racing.

"A lot of people think Vinifera is the only way to go," said Brahm, 54, chugging through the family's Randall-Standish Vineyards in his 1931 Ford. "But you have to be practical and realize that Vinifera cannot be grown every place. Besides, there are tastes for other wines as well."

The new creation is a cross between Gewurztraminer, the noble white that flourishes in Alsace in the northeast France, and a French-American hybrid, Joannes Seyve 23-416.

After seven years of field-testing on two acres, Brahm began retail sales of the aptly named Traminette a month ago. Tramin is the village in Italy where Gewurztraminer first appeared around 1,000 A.D.

A new grape variety comes to fruition in the eastern United States maybe once every three or four years, usually by way of the New York State Agricultural Experiment Station, a world-renowned grape-breading center.

The latest wine variety was created for cool-climate regions from Canada down to Arkansas. Its overriding ingredient in an increasing finicky market is its wine quality.

"It tastes very much like a Gewurztraminer," Brahm said, sipping a sample at his wine goods store. "Gewurz in German means spice. This wine definitely has a spicy fruit characteristic."

"Particularly as the wine ages, it has a nice apricot and honey overtone. The aging potential could make it into one of the finest French Sauternes when it loses some of its spiciness."

Brahm, who manages 45 acres of vineyards with his brothers Tom and Paul, has since 1991 been blending Traminette into a white table wine and a sparkling wine or selling its juice to home wine-makers.

He started bottling it in 1994, and that year's vintage recently picked up a bronze medal in the International Eastern Wine Competition. The wine will be formally unveiled in Rochester this week at the International Symposium on Cool Climate Viticulture and Enology.

To evaluate a new grape, the Experiment Station in nearby Geneva looks for volunteer vineyards in a variety of climates. Traminette is also growing at Amberg Wine Cellars in nearby Clifton Springs, and in Pennsylvania, Michigan and Missouri.

Unlike many classy wines, Traminette produces a high yield of 4-plus tons an acre. It exhibits better resistance to disease the Riesling, the only Vinifera Brahm grows and which he sprays protectively every week or two.

"If you wait, very often you can't reverse the mildew," he said.

The climate he's stuck with plenty of rain and high humidity, long winters, temperatures that can plunge to 20 below in winter, even a tornado-like microburst in June that lifted a mobile home he owns clear across a street.

"I wouldn't even plant Gewurztraminer here." Brahm said. "It's not an economically viable variety in this region."

Not that other wine-makers in the Finger Lakes don't try and succeed. In fact, Vinifera is now grown by more than 60 of New York's 100 wineries, slowly replacing the native and hybrid varieties that, for a century, branded the state as a producer of cheap, simple, sweet wines..

The difference for Brahm is his location. At an elevation of 1,100 feet, his vineyards don't benefit from the warming effects of Canandaigua Lake as well as lower-elevation vineyards along the deeper lakes.

When European settlers first came to North America, the vines they brought with them were too tender to survive.

Only by the 1930's did the refined taste characteristics of European grapes come to the fore in New York in hybrids introduced by Frenchman Charles Fournier. Since then, grape breeders have placed greater emphasis on wine quality.

Brahm, who started Arbor Hill Grapery nine years ago after 23 years as a viticulturist for Widmer Wine Cellars in Naples, grows mostly hybrids such as Marechal Foch and native grapes like Niagara and Catawba.

"I try to make the very best wine that I can in a particular style -- wines that I know certain consumers are going to really like," he said.

Nonetheless, Brahm prides himself on being an experimenter, knowing his future lies in vinifera-resembling wines that are likely to raise the reputation of hybrids.

"I kind of thrive on that kind of thing -- something new, something that's going to either change the economics of an operation or consumer acceptance of a particular product," he said. 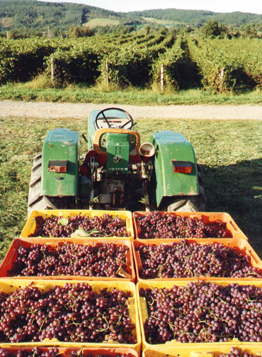 All juices are pre order only. We are closed for season. By appointment only to pick up remaining orders.